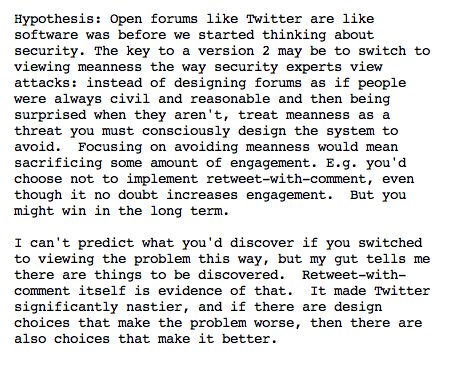 A few lines of the below code does the job:

And here is what Paul Graham (@paulg) means!

Hypothesis: Open forums like Twitter are like
software was before we started thinking about
security. The key to a version 2 may be to switch to
viewing meanness the way security experts view
attacks: instead of designing forums as if people
were always civil and reasonable and then being
surprised when they aren't, treat meanness as a
threat you must consciously design the system to
avoid. Focusing on avoiding meanness would mean
sacrificing some amount of engagement. E.g. you<U+2018>d
choose not to implement retweet-with-comment, even
though it no doubt increases engagement. But you
might win in the long term.

I can't predict what you<U+2018>d discover if you switched
to viewing the problem this way, but my gut tells me
there are things to be discovered. Retweet<U+2014>with-
comment itself is evidence of that. It made Twitter
significantly nastier, and if there are design
choices that make the problem worse, then there are
also choices that make it better.

This took me a while to figure out. I was trying to play with Mapbox-GL maps shown at Play map locations as a slideshow | Mapbox. I was getting an error that WebGL is

My Macbook SSD is running out of space and I am trying to figure out which directories are the biggest in my attempt to clean them up. The best utility I could find